The scientific journal Nature Communications publish the work of Gonzalo Abellán, researcher of the ICMol 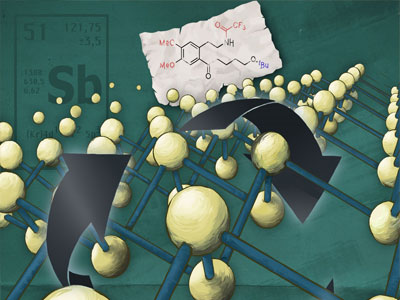 Recently has been published in Nature Communications the paper of the ICMol’s researcher Gonzalo Abellán that shows 2D Pnictogens as excellent catalyst in organic reactions, etitled “Few layer 2D pnictogens catalyze the alkylation of soft nucleophiles with esters”.

Two-dimensional (2D) materials have attracted great attention in the last years due to their outstanding physical properties and their potential applications in optoelectronics, sensors, energy storage, and catalysis. In contrast to the most studied material graphene, the layered allotropes of group 15 elements (P, As, Sb, and Bi, also called pnictogens) have been fairly less developed. In this work, Gonzalo Abellán and colleagues show the synthesis of two different exfoliated, few layer 2D pnictogens (P and Sb) and their use as catalyst in alkylation of alcohols, thiols, and indoles with simple esters.

Lewis acid catalysis is a chemical process that is mainly based on the ability of protons and/or cationic metal atoms to attract electron density from atoms of external molecules and activate them towards the attack of a third chemical entity. However, the use of non-metal species, beyond protons, is much more scarce, in particular of heteroatoms in the low-valence state. Elemental phosphorus has apparently not been reported yet as a catalytic Lewis acid, since phosphorus (0) materials present the most of the atom unaccessible to outer reagents and with neutral or even anionic oxidation states. Here, the high degree of exfoliation in our 2D black phosphorus and antimonene, and the protection against oxidation given by the ionic liquid, allows for the co-adsorption and coupling of alkyl carbonyl compounds (esters) and benzene functionalities (i.e. benzyl alcohols), after formation and stabilization of alkyl carbocations on the lone electron pair network of P and Sb. This mechanism enables Lewis acid catalyzed processes in much milder conditions than with protons or metal cations, giving access to the alkylation of soft nucleophiles incompatible with the standard acid catalyzed conditions.