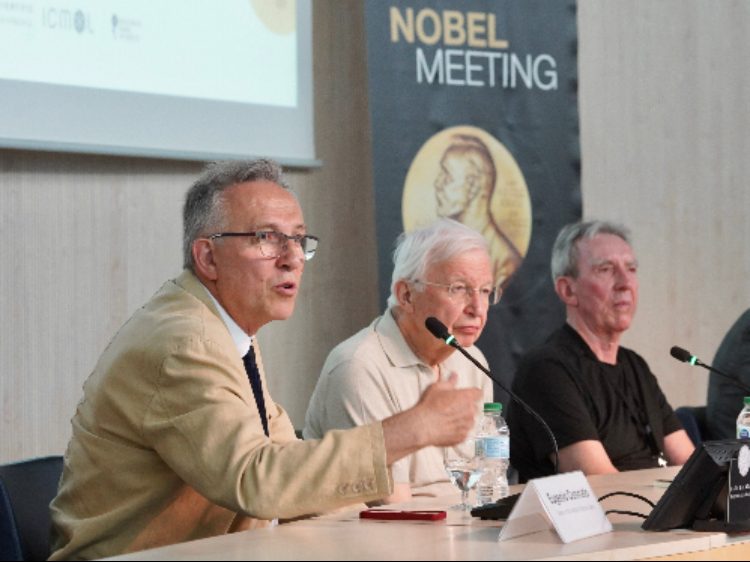 Science is the engine of change. And chemical research is one of its most effective fuels. Both ideas have permeated the interventions of professors Jean Marie Lehn and Jean Pierre Sauvage, both Nobel Laureates in Chemistry, in the #NobelMeeting, a colloquium promoted by the Rei Jaume I Awards Foundation, in collaboration with the Institute of Molecular Science (ICMol) and the Parc Científic of the University of Valencia and moderated this Monday by Eugenio Coronado, Professor of Inorganic Chemistry at the University of Valencia and director of ICMol.

Lehn and Sauvage are part of the juries that are meeting these days in Valencia to decide on the candidates for the Rei Jaume I Awards and to approve a public declaration that this year has demanded a ceasefire in Ukraine from the president of Russia. The #NobelMeeting is part of the parallel activities that bring science closer to teaching and research centres, among which ICMol has been a very active part during these years. In 2003, Professor Coronado was awarded the Rei Jaume I Prize for New Technologies.

The opening of the meeting was carried out by the Vice-Rector for Innovation and Transfer of the University of Valencia, Rosa Donat, who also participated in cross-reflections between these two great names of reference in world chemistry and the public. With a PhD in Mathematics and former vice-dean of the Faculty, the vice-rector emphasised the usefulness of applied mathematics and the fact that, nowadays, graduates in this discipline are highly valued in companies for their way of structuring problems.

In front of a large audience, mainly made up of physics and chemistry researchers, Sauvage and Lehn answered a wide range of questions. From the present and future of chemistry, to the European debate on the decarbonisation of the economy, the so-called European Green Deal, renewable energies or even what field they would go into if they were to start their respective careers today. Are the Nobel Prizes going to be awarded to Artificial Intelligence?

Would you change discipline?

"I think I would go for Neuroscience, not so much for robotics, but for Neuroscience because it defines who we are, our neural system, our brain, which is the most important thing a human being has", explained Lehn when asked if he would repeat his field of research if he were to go back to his career.

For his part, Savage said he is almost convinced he made the right choice. "I think I picked the right branch, very inspiring, plus I got to work with Professor Lehn," he joked.  "I think I would do it again, although I also think that sometimes you don't choose your projects. In any case, he added, "the most important thing for a scientist is to be a pioneer, to be new in your field and to interact with the scientific community".

Lehn added some personal reflections. "Not only during my time as a PhD candidate, but also as a postdoctoral researcher, I think I learned my trade, I learned to distinguish what was relevant and what was 'only' important, I tried to learn as much as possible, not only in my field of research, but also in other fields. And this is very important".

Advices from a Nobel laureate

At this point, they both launched into some advice that they usually give in their talks. "Don't miss a train". What did he mean? He explained. "It happens, sometimes, in the lab that you were investigating something, but something else happens." At that point, "there are people who say that what came up wasn't what they were looking for and they drop it. But others of us think that it's probably more interesting to investigate than what came before".

His second piece of advice was complementary. "Don't get on a train that is full".  He also reflected that. "Sometimes it's interesting to keep progressing in the area you've been working in, but after a long time it's still better to change. Of course, "don't try to jump into fields that are already well developed".

The third piece of advice for young researchers was more complex. "Think perpendicularly. Sometimes it is good to ask questions that "go straight through what you are thinking". It is a good system for trying to reinforce theories.

Jean Marie Lehn (Rosheim, 1939) deployed a combined discourse of pedagogy and scientific depth. But, at the same time, he showed glimpses of his predilection for philosophy, a discipline he has also cultivated in his life, as well as classical languages and French literature.  "Good ideas sometimes come to you in the coffee machine and that happens because you talk to people, you share things and this is very interesting. But you have to be ready to make the connection," he said.

Sauvage, for his part, gave one main and rather general piece of advice. "You have to cultivate a scientific culture to understand what you have learned and what you want to do, because this allows you to understand contexts in which you don't move. In general, they added, "it is important to be clear about what you would like to research. You have to ask yourself what kind of science you want to do."

Sauvage (Paris, 1941) recounted how, in 2017, during a scientific conference in Japan, he was participating in a public event with other researchers and journalists. He was asked about the future of Artificial Intelligence and whether he would one day win a Nobel Prize. The same question was put to him from the audience. "I'm not sure, but probably yes".

For his former mentor, Professor Lehn, Artificial Intelligence "is just a word". Science, he insisted, "is the origin of things and we're trying to understand what's going on". By contrast, AI "is technology, it's not really science". Prof. Coronado mediated to warn that both are probably right and AI is useful for doing science to get results that you wouldn't have otherwise for a long time,

Another of the issues discussed at the conference was the European Commission's strategy for decarbonising the economy. Miguel Burdeos, president of the Chemical and Environmental Association of the Chemical Sector of the Valencian Community (Quimacova), who was also invited to the talk with the Nobel Prize winners, put it on the table. Burdeos was sceptical about Europe's approach to the end of fossil fuels.

In his speech, Jean Pierre Sauvage quoted French chemist Marc Fontecave's book "Stop catastrophism. The truths of the energy transition" ("Halte au catastrophisme. Les verités de la transition energetique"). In his opinion, "a good book that explains and documents scientifically" something he said he agreed with. "There is no doubt that something has to be done, but we can't take everything without knowing how we are going to organise it.

Lehn agreed, but went further: "We cannot put the cart before the horse. Of course, I share the concern for the future, but taking measures too quickly will not be good, because you have to do it in a way that helps society," he said. For the French professor, with C02 being released "it is a question of quantity and percentages". The amount in the atmosphere today is "very high".

But stopping the CO2 increase now "will not change things quantitatively as long as China, India and other countries do not take restrictive measures". Science is capable of finding ways to produce and store energy. And this is what is important, not so much the current CO2. Chemists, he said, "have always been green, it is part of our job, and we are looking for solutions.