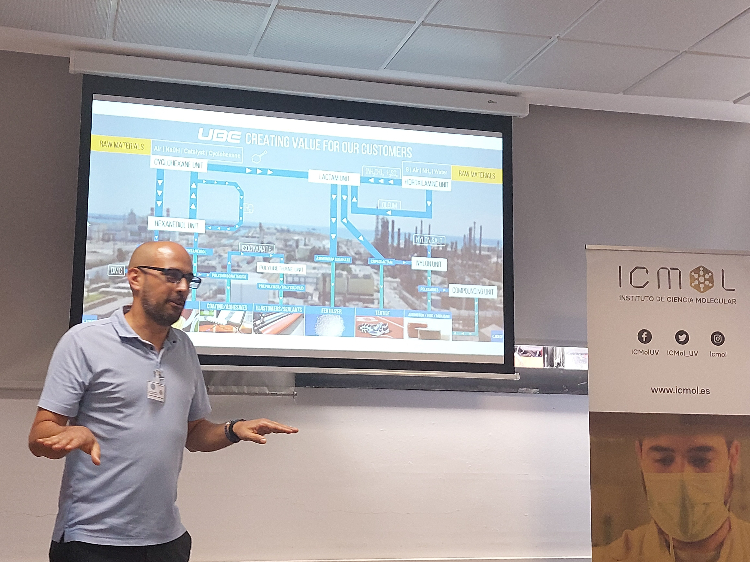 The Institute of Molecular Science of the University of Valencia and UBE Corporation Europe, a Japanese industrial group based in Castellón, have held a working day in which three executives of the company shared with ICMol researchers some of the lines of work of the corporation in order to establish possible collaborations based on the research carried out at ICMol.

The UBE Industries delegation was made up of Raúl Sangròs, Research and Development manager; Francisco Rodriguez, head of the Chemistry area (polyols and polyurethane, dispersants for pigments and fertilisers) and Sergi Gómez, coordinator of polymers (polyamides and other thermal thermoplastics).

The programme of the visit was organised by the Tech Transfer area of the Institute of Molecular Science led by Manuel Quesada and Francisco Marqués and included the interventions of the three directors, who gave some details of the activities and products developed in the factory in the presence of the director of ICMol, the professor of Inorganic Chemistry at the University of Valencia, Eugenio Coronado, and the manager of the centre, Ruth Manzanares.

The meeting with the directors of UBE Corporation Europe was also attended by a large group of researchers from several of the strategic areas developed at ICMol, a centre accredited as a María de Maeztu Unit of Excellence by the Ministry of Science and Innovation. Manuel Quesada was in charge of introducing the speakers, whom he described as "people who are very interested" in the ideas and projects that emerge from laboratories and research groups as advanced as those housed at ICMol.

UBE Industries, Ltd. is a Japanese business group founded by Sukesaku Watanabe 120 years ago in the Japanese city of Ube. It has been present in Europe for 50 years under the umbrella of UBE Corporation Europe. Its industrial base and European headquarters in Spain is located in Castellón and is dedicated to the production and distribution of value-added chemical products and the design of technological solutions for different industries.

The Science-Industry meetings are part of the programme of activities developed by ICMol's Transfer area. Another initiative is the #DesayunosICMol de Inonovación, which are promoted by the Valencian Innovation Agency (AVI). Since 2018, ICMol has the seal of Industrial Innovation Scientific Unit (UCIE) funded by the AVI, which has allowed the centre to position itself in the network of the regional R&D&I system, strengthening relationships and collaborations with other complementary agents and promoting technology transfer to industry.