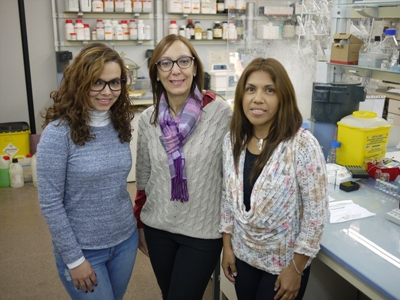 Researchers at the Institute for Molecular Science of the University of Valencia (ICMol), led by Professor Julia Pérez-Prieto, have developed a method for preparing methylammonium-lead bromide (CH3NH3PbBr3) hybrid nanoparticles with extraordinary luminescence. Indeed, this work has successfully increased the luminescence efficiency of nanoparticles up to 80% and has also proven their high stability under ultraviolet visible light. The ‘Journal of Materials Chemistry A’ has just gathered online the conclusions from this work.

Early in 2014, scientists reported having obtained the first CH3NH3PbBr3 nanoparticles, soluble in organic solvents and with a 20% luminescence yield. Professor Julia Pérez explains that, first, the strategy for preparing these nanoparticles was to confine the perovskite structure with long-chain ammonium bromide salts. In collaboration with researcher from the University of Valencia Henk Bolink, also a member of ICMol —located on the University of Valencia Science Park—, they prepared thin films with these nanoparticles and measured their electroluminescence, which was ten times greater than that of the bulk material. The luminescence yield of these nanoparticles, either in dispersion or in film, was close to 20%.
The team led by Pérez-Prieto set out to improve the luminescent performance of these nanoparticles by decreasing surface defects through a better coating. As revealed in the paper published in the ‘Journal of Materials Chemistry A’, they have managed to obtain nanoparticles “with improved solubility and outstanding luminescence by fine-tuning the molar ratios of the components used in the preparation of this material (ammonium salt and lead bromide)”, said the director of the study.
Photovoltaic applications
Currently, scientists have shown great interest in lead halide hybrid perovskites for their ability to absorb light in the ultraviolet-visible spectrum, their luminescence and electrical conductivity and their desirable properties for photovoltaic applications. Preparing perovskites as small nanoparticles (with a diameter of less than ten nanometres) allows them to disperse in a non-aqueous medium, which facilitates their processing and, thereby, their future use in solar cells and luminescent materials. The most extensively studied lead perovskite is iodide perovskite for its greater ability to absorb light in the visible spectrum. However, bromide-based perovskites have been proved to be less moisture-sensitive.
Julia Pérez-Prieto is a professor of Organic Chemistry and the head of the Photochemical Reactivity Group at the University of Valencia ICMol. She coordinates the Master’s Degree and the Doctoral Degree in Sustainable Chemistry in Valencia and is an associate editor of the ‘EPA Newsletter’ journal. Her research focuses on the design and synthesis of new photoactive materials (inorganic nanoparticles, supramolecules and molecules) as well as on the study of the potential of nanoparticles to be used in molecular recognition, photocatalysis, bioimaging, photodynamic therapy or luminescent devices, depending on their composition.
Soranyel González-Carrero, Raquel E. Galian, Julia Pérez-Prieto. ‘Maximizing the emissive properties of CH3NH3PbBr3 perovskite nanoparticles’, Journal of Materials Chemistry A, 2015, DOI: 10.1039/C4TA05878J