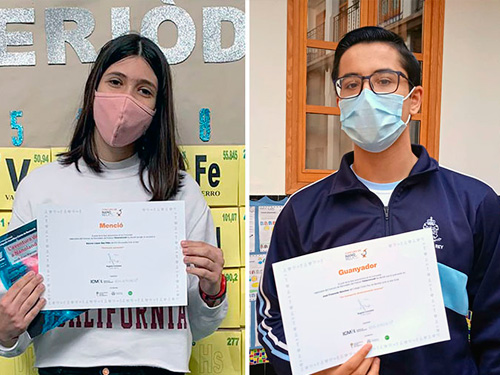 José Fresneda Sánchez, a fourth year of secondary education student at the Cristo Rey de Benifaió School, has been the winner of the nano-tales contest organised by the “10alamenos9” Nanoscience and Nanotechnology Festival, which in the Valencian Community coordinates the Institute of Molecular Science of the University of Valencia (ICMol). His story “A diminutively huge transport” thus accesses the international phase of the contest. Edurne López San Félix, from IES Almussafes, has obtained second prize.

The jury has mainly highlighted the originality and scientific rigor of the story of José Fresneda, the young high school student winner of the award “There are many stories in the nanoworld: tell us about them”, in modality A aimed at 3rd and 4th year of secondary education students, convened within the framework of the Festival “10alamenos9”. “A diminutively huge transport” –title of the story– addresses the issue of nanomedicine and the encapsulation of drugs for the treatment of cancer. The story competes in the international phase of the contest.

In the same category, to which 35 stories have been submitted, the 3rd year of secondary education student Edurne López San Félix, from the IES Almussafes, has obtained a second prize with “Lost Particles”, a narrative about the quantum world. The award has been left vacant in modality B, intended for Baccalaureate students and training cycles.

The contest, which has the collaboration of the University’s Scientific Culture and Innovation Unit (UCC+i), aims to foster interest in the world at the nano-scale –the nano-world among the educational community.

The “10alamenos9” Festival, which is held annually in different cities with the aim of bringing nanoscience and nanotechnology closer to citizens, encompasses different informative actions that take place throughout the months of April and May. The Festival has 16 venues in Spain and Latin America.

For this year’s Valencian edition, the ICMol has organised three types of activities. In addition to the nano-tale contest, they are holding a cycle of “Nanodialogues” among young students and researchers, and a “Nanoscience Vermouth” that offers different talks and seminars. The complete program can be consulted on the Festival website or at the ICMol.