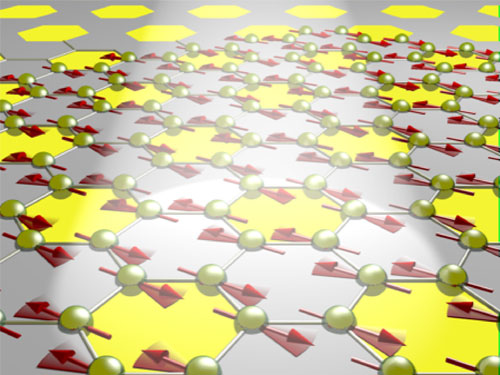 An international research team, with the participation of the Institute of Molecular Science of the University of Valencia (ICMol), has discovered how to control spin waves by light in an insulating material formed by magnetic layers. It is a step towards a new generation of devices that store and transport information in a highly efficient way and with very low consumption. The work is published in Science Advances.

The ‘spin wave’ and ‘spintronics’ –neologism from spin and electronics– are concepts that take centre stage in the language of computing and information storage thanks to the impact of nanoscience on this field.

If throwing a stone into a pond generates a wave that propagates over the surface of the water, something similar happens when the action of a magnet or a pulse of light, for example, propagates over a magnetic material – made up of small magnets (spines) connected to each other – and produces what is known as a ‘spin wave’. This process allows information to be transmitted without the need to carry electrical charges, thus minimising the energy losses that, in the form of heat, inevitably occur in conventional electronic devices. Therefore, using an insulating magnetic medium instead of an electrically conductive medium can open up the possibility of manufacturing very low energy consuming devices that do not require either electric currents or electrodes to store and transport information.

The international research team of scientists from the Netherlands, Spain and Ukraine has managed to modulate the spin waves with ultra-short pulses of light – a trillion times less than a second – in a magnetic material consisting of layers of nickel, phosphorus and sulphur (NiPS3). “By selecting the appropriate wavelength at will, it is possible to activate and deactivate the propagation of these two-dimensional spin waves”, says Eugenio Coronado, a member of the Spanish team with Samuel Mañas, both researchers in the ICMol of the University of Valencia. “Since this propagation occurs on the surface of the material, the choice of a laminar material offers a very promising route for transmitting information in ultra-thin devices, as its thickness can be reduced to that of a monolayer of thickness atomic in the same way as in graphene”, he adds.

The results of this work constitute the first step towards the manufacture of hybrid devices formed by photoactive molecules anchored on magnetic materials, in which the optical stimulation of the molecule with visible light can be transformed into a magnetic signal that propagates to distances of hundreds of nanometres. This new technology is the basis of the European project SINFONIA (Selectively activated information technology by hybrid organic Interfaces) that the group of Valencia, led by Coronado, has just started in the framework of the FET-OPEN call of the H2020 program. Raised in the field of ICT, SINFONIA proposes the storage and transport of information in hybrid interfaces formed by photoactive molecules and antiferromagnetic materials.

FET-OPEN grants (Pathfinder, in the new Horizon Europe program) are aimed at strengthening major scientific and technical research projects of excellence linked to breakthrough technologies and carried out through collaboration.