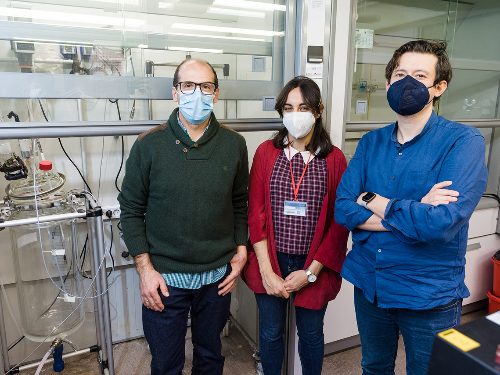 Researchers from the Institute of Molecular Science (ICMol) of the University of Valencia (UVEG) are taking part in REMADYL, a Horizon 2020 European Project consisting in developing scavenger materials for the removal of lead stabilizers from ‘old PVC’, that is, at the end of their useful life and use later lead in the manufacture of batteries. The work is part of the European line of transition towards a green economy and society through ecological innovation.

‘Old’ PVC added with inherited hazardous substances (LS) constitutes most of the current post-consumer waste of hard PVC - window frames, pipes, for example- and soft PVC -floors or cables-, among others. The presence of LS (low molecular weight phthalate plasticizers and stabilizers based on heavy metals) is a persistent barrier to PVC recycling, as there are currently no economically viable solutions for its disposal.

The research team is developing an innovative one-step continuous process based on extractive extrusion technology in combination with new solvents and melt filtration, which has the potential to rejuvenate old PVC into high-performance PVC purity at a competitive cost in the market.

Firstly, the UVEG successfully developed a lab scale synthesis to obtain a precursor material for support the species directly responsible for the scavenger of the lead, based on called Layered Double Hydroxides (LDH). This precursor material consists of layers of divalent and trivalent metal cations with an interlayer space that can be occupied by different size anions.

In a second phase, the researchers from the University of Valencia have successfully optimized a semi-pilot synthesis to obtain the LDH precursor material at a larger scale. Recently the team has developed at lab scale the process for the synthesis of MoS4-LDH, whose synthesized particles will be later mixed with the PVC and subsequently, together with the adsorbed lead, recovered by filtering.

The project will facilitate the recycling of PVC for window profiles and waterproofing sheets. The extracted phthalate plasticizers will be disposed of safely, with energy recovery, and the lead will be reused in batteries.

REMADYL, carried out by a consortium of 15 European partners, including 9 companies, will introduce PVC into the Circular Economy and meet the resource efficiency targets for Europe, as recovered PVC will reduce incineration and landfills.

The University of Valencia team is made up of researchers Carlos Martí-Gastaldo, Carmen Fernández Conde and the PI of the project, Antonio L. Ribera Hermano. The project is managed by the Executive Agency for Small and Medium-sized Enterprises (EISMEA) of the European Commission.