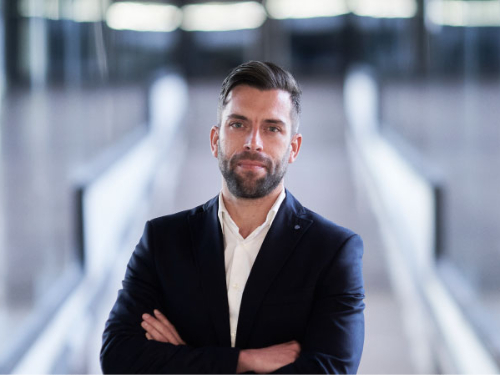 The European Research Council (ERC) has awarded an ERC Starting Grant of  1.5 million to Dr. José Jaime Baldoví (Xàtiva, 1986), distinguished researcher from the Gen-T Excellence Program of the Generalitat Valenciana in the Institute of Molecular Science (ICMol) of the University of València to develop his project 2D-SMARTiES, which aims to chemically design smart devices formed by molecules and 2D materials in order to crucially advance information technologies.

The ERC Starting Grants are highly competitive and are addressed to outstanding researchers with a postdoctoral experience between 2 and 7 years, to allow them to perform groundbreaking research. In this years call, the ERC has received 4056 applications, being only able to fund 9.9% of them, with a total budget of  619 million.

This kind of grants has as unique evaluation criteria scientific excellence, both of the researcher and the project. The ERC grant will allow Baldoví to create his own research group and to generate six job positions during the coming 5 years to carry out his novel research, which aims to develop molecular magnonics and revolutionize information technologies using smart 2D materials.

Most of the applications that we use in daily life are based on electronics, which rely on the motion of electric charges through a conductive material. As electrons move through the circuit, they experience scattering leading to energy losses that we perceive as heating, increasing electrical resistance and affecting to the efficiency of such devices.

However, Nature has permitted the possibility to communicate electrons at a distance using their magnetic interactions. This disruptive concept is the object of study of magnonics, a bourgeoning research field since the past decade related with nanomagnetism and nanoscience, which is based on the so-called spin waves (magnons), that will allow us to process, transmit and store information without charge transport using magnetic materials. The idea is similar to the flow of a Mexican wave in a stadium, where spectators dont move but information is transferred from one point to another of the stadium.

In the project we will design new architectures at nanometric scale, formed by few-atoms-thick magnetic materials and smart molecules that can interact with external stimuli, such as light. This will allow us to generate spin waves at will using light pulses, and will provide an unprecedented control of their transmission, taking advantage of the huge versatility that Chemistry offers. explains Baldoví.

The research will be structured into three steps. Firstly, the more adequate smart molecules to interact with the spin waves of the 2D material will be selected by carrying out computational simulations. In the second step, the effect of a type of materials called topological insulators as a substrate will be studied, in order to amplify the signal and increase the lifetime of the spin waves.

Finally, the nanodevices will be fabricated in collaboration with experimental groups from ICMol and the Technical University of Dortmund, Germany.  My dream is to bring into reality the predictions that we will be performing at each step using the supercomputers. For that, we will have the support from renowned groups in molecular nanoscience

José J. Baldoví is a distinguished researcher with international experience at ICMol of the University of València (UV), where he currently leads the research line on chemical design and modelling of hybrid heterostructures based on magnetic molecules and 2D materials.

Baldoví studied Chemistry at UV, with extraordinary award, carrying out the final year research project in Cambridge University, UK, where he started his research activity. Then, he joined Prof. Coronado group, Full Professor of Inorganic Chemistry and director of ICMol, completing an MSc and a PhD thesis in Nanoscience and Nanotechnology, both with extraordinary award.

His PhD thesis, based on the rational design of molecular nanomagnets with applications in nanoscience, molecular spintronics and quantum technologies, was achieved the highest score between all the PhD thesis in Chemistry of the UV in 2016.

Furthermore, his PhD was recognized at national level with the 2nd Runner-up Prize at NanoMatMol Best PhD 2016 Contest delivered by the specialized group of "Nanociencia y Materiales Moleculares" from the Royal Spanish Society of Chemistry (RSEQ) and Royal Society of Physics (RSEF) and, at European level, with the best oral presentation at the VI European Conference in Molecular Magnetism.

In 2017 he moved to Prof. Ángel Rubio's research group in the Max Planck Institute for the Structure and Dynamics of Matter in Hamburg, Germany, after being awarded with a Marie Curie Individual Fellowship of the European Commission.

This postdoctoral experience expanded his research interests to the field of theoretical simulation of 2D materials and van der Waals heterostructures, allowing him to design novel multifunctional materials.

In January 2020 he moved back to ICMol after being awarded a CDEIGENT excellence contract thanks to the attraction of talent program (Plan Gen-T) of the Generalitat Valenciana. Since 2012, José J. Baldoví is co-author of more than 50 scientific articles in international scientific journals and a book chapter, being first author in more than 50% of them. Moreover, he has given 12 invited lectures at international conferences.

His works have attracted more than 2250 citations so far. Nowadays he is co-supervisor of three PhD theses and a final year MSc project. Furthermore, he holds a Master in Science Communication that allows him to transfer the value of science to society through different public science articles and events.

Within the prestigious grant from the ERC, Baldoví expects to generate synergies with other ERC projects developed at the Molecular Science Institute, a research center with the seal of excellence María de Maeztu from the Spanish Ministry of Science and Innovation. With the ERC Starting Grant obtained by Baldoví, ICMol has gotten 12 projects from the ERC program lead by 10 of its researchers. Among them, 9 will be running at the same time in 2022, a record number among research centres in Spain and in the own history of ICMol.