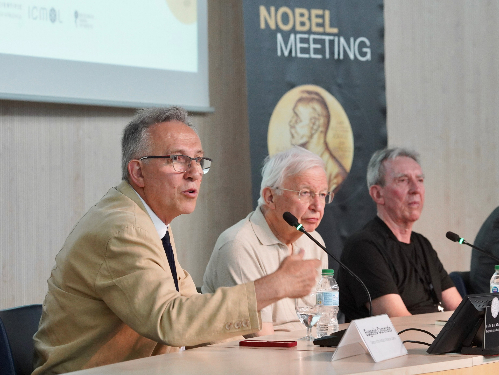 The Russian Academy of Sciences (RAS) has recently voted to elect, as a foreign member, Eugenio Coronado Miralles, Full Professor of Inorganic Chemistry and Director of the Institute of Molecular Science (ICMol) at the University of Valencia, a centre recognised as a María de Maeztu Unit of Excellence by the Spanish Government.

Professor Sergey Aldoshin, director of the Institute of Chemical Physics of the RAS, reported to Coronado of the approval of his candidacy, which received more than 1,000 votes in the secret ballot provided for in the statutes of the RAS for the admission of its members.

Professor Coronado is already a member of the Chemical Sciences Section of the European Academy of Humanities, Letters and Sciences, which was established in Cambridge in 1988 as a complement to the European Science Foundation, an organisation dedicated to promoting basic research in Europe. It consists of 16 areas of knowledge and more than 2,000 members (55 Spanish), including nearly 40 Nobel Prize winners, some of them recent winners.

The director of ICMol has also been distinguished with the Van Arkel Chair of the University of Leiden (2003) and has been appointed Fellow of the Royal Society of Chemistry of England (2004). Since 2018, Eugenio Coronado is Doctor Honoris Causa by the Université de Bretagne Occidental (UBO), in Brest (France), a recognition that was promoted by the Laboratoire de Chimie, Electrochimie Moléculaires et Chimie Analytique (CEMCA-CNRS/UBO).

In 2020, he was also awarded the Humboldt Research Prize by the Alexander von Humboldt Foundation in Germany. The award recognises researchers whose fundamental discoveries have had a significant impact on their discipline and who are expected to continue to produce cutting-edge achievements in the future.

In Spain, Coronado has accumulated different awards and distinctions such as the Rey Juan Carlos I National Prize for Scientific and Technical Research (1997) or the Rei Jaume I Prize for New Technologies (2003), among others. He has also been the first Spanish scientist to be awarded the Gold Medals of the Spanish Royal Society of Chemistry (2009) and the Spanish Royal Society of Physics (2019).

Coronado has also recently been included by Forbes magazine in its Top 50 list of the most awarded Spaniards, a ranking that recognises the talent of professionals from different disciplines who have been distinguished in the last five years by prestigious institutions outside Spain and whose work generates global impact.

Over the last few decades, Coronado's research has stood out in the fields of nanoscience, nanotechnology and molecular magnetism. The professor and his team designed, for example, the first molecular materials in which the properties of magnetism and electrical conductivity coexist for the first time, a work that, according to the journal Nature, "opens a new frontier in molecular electronics".

Founded in St Petersburg by order of Peter the Great in 1774, the Russian Academy os Sciences is currently chaired by physicist Alexander Sergeev. It is part of the International Science Council (ISC), a non-governmental organisation that brings together more than 200 international scientific unions and associations, as well as national and regional scientific organisations.