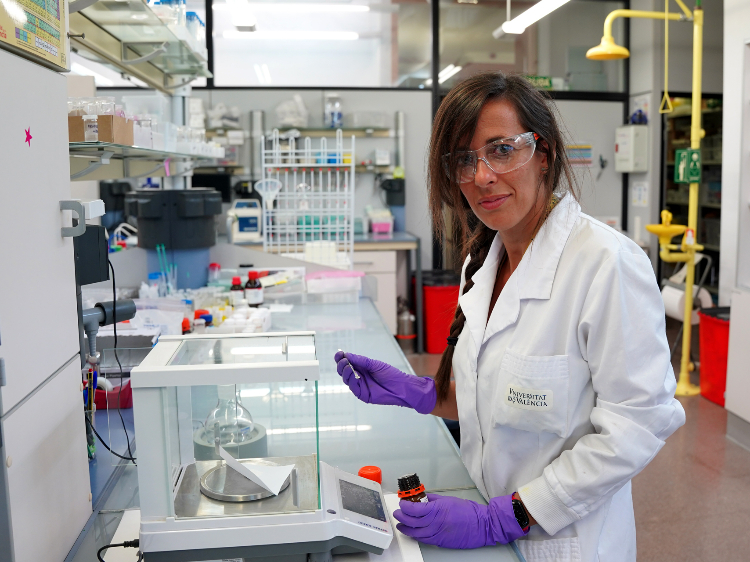 Natalia Muñoz Padial, a researcher at the Institute of Molecular Science of the University of Valencia, has been recognised with the Innova award from the SusChem-Spain Sustainable Chemistry Technology Platform for researchers under the age of 40, for her work on a new class of sustainable P(V) reagents that are more efficient and more environmentally friendly, which she has developed at the Scripps Research Institute, in collaboration with Bristol Myers Squibb.

There are numerous types of phosphorus-derived reagents used in broad applications in different industries, including the life sciences. Specifically, phosphate-derived reagents are of particular interest in the search for new drugs and in the development of patient-specific gene therapies.

Such reagents, with the potential to selectively prepare DNA- and RNA-like analogues - known as oligonucleotide drugs - are playing an increasingly important role in the search for new drugs. Oligonucleotides are an emerging class of drugs made from short DNA sequences that carry genetic instructions designed to disrupt a disease. However, the production of these complex compounds can come at a high price in both cost of goods and sustainability.


"One of the characteristics of these new reagents is that they are very versatile", says Natalia Muñoz. They can be used with a variety of chemical and biological systems. For example, they allow the rapid synthesis of enantioselective ligands for chemical catalysts, as well as the development of "biological probes" used in the study of diseases, such as COVID-19. The methodology is therefore aimed at both the chemical and pharmaceutical industries.

Natalia Muñoz's research into reagents that are sustainable and can be produced at scale has recently won two other awards. Firstly, the Robert Robinson Award from the Organic Division of the prestigious Royal Society of Chemistry in the UK. And secondly, the Green Chemistry Challenge Award from the US Environmental Protection Agency (EPA).

These new sustainable reagents can be applied in a wide variety of settings, both in solution and in solid phase, enabling the discovery of new therapeutics. The oligonucleotide synthesis technology allows for better control of the products you are making while reducing the number of chemical steps and reagents needed, making it more cost-effective.

Natalia Muñoz Padial (Granada, 1983) currently holds a Junior Leader grant from La Caixa and works in the Functional Inorganic Materials (Funimat) research group led by Carlos Martí-Gastaldo at ICMol, a centre recognised as a María de Maeztu unit of excellence by the Spanish Ministry of Science and Innovation.

She previously obtained grants from highly competitive scientific programmes such as the Marie Skłodowska-Curie of the European Commission or the Juan de la Cierva of the Ministry of Science and Innovation, both in the training and incorporation categories.

The researcher graduated in Chemistry at the University of Granada (2010), an institution where she subsequently completed a master's degree in Chemistry and a PhD (2016) with a thesis that obtained the highest qualification and awards such as the extraordinary doctorate of her university or the Andalusian section of the Royal Spanish Society of Chemistry (RSEQ) for the best thesis. He also began teaching thanks to a scholarship from the Andalusian Regional Government.

In her pre- and post-doctoral career, Natalia Muñoz has worked, among others, in the group of Professor Melanie S. Sandfor at the University of Michigan or at the aforementioned Scripps Research Institute in California, considered one of the best non-profit scientific institutions in the United States and worldwide. There he worked with Professor Phil S. Baran.

His work in collaboration with Bristol-Myers Squibb was awarded the SusChem prize for innovative chemistry in the search for sustainable chemical reagents. His concern for obtaining useful scientific results for the industry has led him to work with other companies, such as the multinational Sensient Fragrances S.A. or the pharmaceutical companies Pfizer Inc. and Bristol-Myers Squibb.

The SusChem-Spain award, endowed with 5,000 euros, recognises work developed from collaborations between public and private institutions that have generated results in the last three years in any area related to Sustainable Chemistry, especially work on the transition to the Circular Economy and Decarbonisation.

The award includes a stay in Tecnalia's applied chemistry research laboratories or mentoring by the Tecnalia Ventures teams, focused on improving their skills in the field of technological entrepreneurship. The jury was chaired by Joana Frontela.

UV Finalist in the Research category

On the other hand, a scientific publication by another researcher at the University of Valencia, Ramón Torres Cavanillas, PhD in Nanoscience and Nanotechnology at the Institute of Molecular Science, has been declared a finalist for these same awards in the Research category. The work "Spin-crossover nanoparticles anchored on MoS2 layers for heterostructures with tunable strain driven by thermal or light-induced spin switching", has been developed at the ICMol of the UV.

The Suschem awards are divided into three categories: Futura, Investiga and Innova. They are awarded by a multidisciplinary jury, made up of professionals of recognised prestige in the scientific, academic and institutional fields, both from the public and private sectors of Spanish chemistry. This year, the Futura award went to Alejandra Pita and the Investiga to Ignacio Funes.